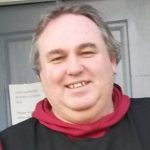 Brother Gilbert (Athol) Bloomer has a B.A. from the University of Western Australia (UWA) in History, English, Ancient History and Music, a Grad.Dip.Ed in History, English and Religion from the the Australian Catholic University (ACU), a Master of Arts in Theological Studies from Notre Dame University in Fremantle and has completed a Master of Theological Studies at ACU recently. He has also completed Philosophical and Theological units from three Catholic Schools of Theology in the Philippines as well as having studied Torah and Jewish studies in Yeshivot in Australia and Jerusalem and completed Modern Hebrew Language studies at two different Hebrew Ulpans in Jerusalem. He is a Hebrew Catholic of Anglo-Jewish and Anglo-Celtic ancestry. In 2010 he became a consecrated brother in a Catholic community and now is the Littlest Brother (superior) of the brothers who live at St Joseph's Hidden Place in a hidden valley in Tasmania.