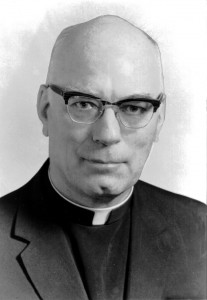 Ed. The following appeared in The Hebrew Catholic #64, pp. 11-15. All Rights Reserved. The obituary was sent to us by Msgr. Kevane’s long time faithful secretary, Margaret M. (Peg) Fitzgerald.

In 1934, he received his bachelor of arts degree with a major in Philosophy and Mathematics at Loras College, Dubuque, Iowa, and his master of arts degree with emphasis in Guidance and Counseling, and School Administration, from Creigh-ton University, Omaha, Nebraska, in 1949.

Monsignor Kevane was ordained to the Catholic Priesthood at the North American College, Rome, on December 8, 1937, after having completed his theological studies at the Gregorian University in Rome.

His broad career began in Sioux City, Iowa, where as an associate pastor at the Cathedral of the Epiphany from 1938 to 1942, he was assigned to teach Religion in the parish elementary and secondary schools, and to conduct adult catechesis.

Monsignor Kevane served as chaplain in the U.S. Army Air Force from 1942 to 1946 in the Pacific theater, and was honorably discharged at the rank of Major. An outgrowth of this service as well as his early experience in teaching small children led him to his interest in International Education for Development.

Monsignor Kevane was appointed the first Principal of Heelan High School from 1947 to 1957. Later he established the Catholic Youth Organization at the new Heelan addition, and also served as Founding Editor and Editor-in-Chief of the Sioux City Globe.

In 1958 Monsignor Kevane left Iowa to join the faculty of The Catholic University of America in Washington. In 1960, he was awarded a Licentiate in Philosophy (Ph.L.) with a major in Philosophical and Social Foundations in Education, and Doctor of Philosophy (Ph.D.) with emphasis and dissertation on Foundations of Education, and Education for Development. Both were earned at the Catholic University of America in Washington.

From 1964 to 1968, he served as Dean of the School of Education at Catholic University, where he established a prominent faculty and an updated curriculum, which included leading specialists in programs for Educational Technology, International and Comparative Education, and Exceptional Children. He also founded the Center for Community Development and organized the first program for International Development.

In 1966, Monsignor Kevane was the only Dean at the Catholic University to support the dismissal of Father Charles Curran and did not support the strike called to force rehiring the controversial theologian, as was noted by Father Franklyn M. McAfee in special ceremonies honoring Monsignor Kevane, president emeritus of the Notre Dame Apostolic Catechetical Institute, “This position of conscience and courage eventually brought Monsignor Kevane’s career at the Catholic University to an end, but his stand was vindicated by the later action against Father Curran by the Holy See and the university.”

Of special interest today is the report of events surrounding this catastrophe in which Monsignor Kevane played a strong and disturbing role to the opposition as described in a recently published book entitled “John Cardinal Krol and the Cultural Revolution,” written by E. Michael Jones.

As reported on September 8, 1988, in the Arlington (Virginia) Herald, the official diocesan newspaper, Father McAfee, president of the Notre Dame Institute, awarded Monsignor Kevane an honorary degree of Doctor of Divinity in the Cathedral of St. Thomas More, in Arlington.

At that time, Father McAfee, today pastor of St. Lawrence Church, in Alexandria, Virginia, cited Monsignor Kevane for his long and distinguished career as both an educator and a priest. Upon the conferral of the degree, the large congregation gave Monsignor Kevane a long standing ovation.

In 1969, Monsignor Kevane was appointed to the position of Founding Director of the Notre Dame Pontifical Catechetical Institute as well as Founder and Director of the Center for Family Catechetics by the late John Cardinal Wright.

Two years later, Monsignor Kevane founded the Center for Family Catechetics under the direction of Cardinal Wright, for the St. Pius X Catechism. In 1972, he was appointed to the Faculty of Theology, the Pontifical University of St. Thomas Aquinas in Rome as Visiting Professor of Catechetics. Two years later, he was appointed Professor of Catechetics at the Institute for Advanced Study of Catholic Doctrine, St. John’s University, New York.

In 1981, Monsignor Kevane was appointed Professor of Catechetics at St. Paul’s Catechetical College, Boston. In 1982, he was elected to the Pontifical Roman Academy of Theology at a formal convocation of the Academy in Rome.

In 1985, at the time of his resignation as Founder and Director of the Institute, the Most Rev. John R. Keating, Bishop of Arlington, wrote in the Arlington Herald, the diocesan newspaper, that:

“Monsignor Kevane’s contribution to the catechetical field is inestimable. As founding director of the Notre Dame Institute, he spearheaded the building of and has been the guiding inspiration in the growth of this fine institution. His accomplishments in cooperation with the Sisters of Notre Dame in this endeavor have greatly enriched the life of the Church, not only in Arlington, but in the Church universal.

“His total commitment to orthodoxy in the Roman Church, one of the greatest of his many outstanding attributes, will have a stabilizing influence on catechetical teaching for years to come. We thank him for the many well-trained catechists who are – at this moment – passing on the true faith across the land,” the Bishop stated.

Father McAfee, at that time assistant director of the Institute and longtime friend of Monsignor Kevane, said:

“I have always been amazed at the astounding scope of his expertise and interests which range from his well-known work in catechetics and philosophy to efforts in South America to help indigenous farmers increase agriculture products for their people, to an evangelical love for the Jews and Israel, and to a disciplined study of Marxism.

“In all these endeavors he has demonstrated a thoroughness, a clarity of thought, and a real zeal for the truth which is foreign to much of contemporary scholarship. His greatest impact, however, has been in the war zone of contemporary catechetics where he has insisted that the teaching of religion not only be orthodox but also appealing and in dialogue with the advance in the communication arts.”

Among the ecumenical challenges of Monsignor Kevane was his interrelationship with the Association of Hebrew Catholics (AHC), located in New York. Monsignor Kevane travelled to Israel where he met with Father Elias Friedman, O.C.D., the founder of the AHC, and assisted in the development of the Association. Monsignor Kevane wrote the Preface for Father Friedman’s book, entitled “Jewish Identity,” and was a regular contributor to the Association’s monthly newsletter. Monsignor’s book, “The Lord of History, Christocentrism and the Philosophy of History,” relates to the historical role of Jews and Christians.

Monsignor Kevane is the author of nine books, including his latest entitled Jesus, the Divine Teacher, scheduled for publication in 1996, and another book entitled The Deposit of Faith, under consideration for publication. He translated the Pius X Catechism into English from the Italian.

Monsignor Kevane designed the Faith and Life Series, published by Ignatius Press and widely distributed in the parishes throughout the United States. He lectured widely in the United States and Europe, and made numerous contributions to such publications as the Catholic Biblical Quarterly, Catholic Educational Review, Recherches Augustinniennes, Studia Patristica, L’Osservatore Romano, Social Justice Review, and Homiletic and Pastoral Review.

Monsignor Kevane is the son of the late Sara Distell and Michael Kevane. His brother Philip, resides at 3007 Nebraska Street, Sioux City, Iowa.